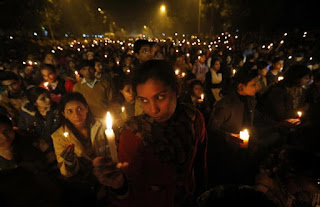 She is no more… just physically though

She was just 23. Like every other girl of her age, she had dreams to Graduate, get married, have children and live a happy family life. She wanted to LIVE, she fought hard for it, even the prayers of millions of we Indians could not save the angel’s life, perhaps God needed her more than us, and perhaps she was destined for a better place. The demise of the Braveheart has left the nation shocked with tearful eyes, and completely heartbroken. I may be mimicking many voices, but then as an Indian, I must say, I apologize to you Sister for not having saved you, and I apologize to many more sisters who have undergone such ghastly crimes by someone of my gender, I deeply apologize to you all being a MAN.
This afternoon (at 2’o clock) I was taken aback on listening to Arnab’s debate on Times Now with panelist discussing on Women’s safety. I got anxious and started thinking if She is alright and after a few minutes, the news flashed, She is no more…(She died in wee hours of Saturday morning at a Singapore hospital). I was deeply saddened and (almost) cried for few minutes, for I and millions of Indians had been praying for her speedy recovery for last few days.


Changes in Law and more importantly, IMPLEMENTING them.

The uprise and candlelight protests by thousands of youth across the country after the calamitous night, symbolizes and demands for a stringent law against any sex-related offence in the future. As a Citizen of India, may I ask the Government to forge up strict laws that advocates not only the safety against rape but any form of sexual assault, be it child abuse or denigrating the dignity of women in any way. I have heard enough of ‘a 3 year old,…. a 10 year old,…. girl getting raped and killed..’ like news. Not any more, Please stop it. These culprits, the enemies of humanity have no right to live, they blemish the whole humanity and deserve to be hanged. Dear Politicians and makers of Law, please awaken and do something worthwhile so that the death of the Braveheart does not go in vain.

Changes in the mindset of people – Need of the Nation…

The other day, I called my sister and after greeting her she blessed me with having a son, the next time. (She had been giving (me) such blessings ever since I got married). I got angry and asked her to stop giving such blessings which plays down the dignity of a Girl Child. Four months ago, when my daughter, Sanskriti was born, many elderly people in family and neighborhood were saying “Beta, do not belittle your heart, what if Girl is born this time, next time you will have a son.” Why should I belittle my heart in first place, an angel has come to grace my family and I consider both genders equally. I told to these people any such words would be an insult to my daughter and please refrain from saying them. While they represented an earlier generation, I am surprised seeing people of my generation carrying similar thoughts. When a baby boy is born, the news is spread with joy and they welcome a girl child with a heavy heart and sometimes even bemoaning and breast-beating. Female foeticide being a commonplace in India, Couples pray for the want of baby boy who would become bearer of their family name, they consider Girl child as a liability who would go to other’s house after being married and take the sur-names of their husbands. Without being too cynical, may I ask these people that what the sons do at large, majority of them, even do not bother to care about their Parents, sometimes even bash them for their old-age mistakes and slowness and set the pyre ablaze after their deaths, even the daughters can do this. This is just about mindset.

In small towns and villages, it is quite banal that girls are made to sacrifice their childhood rights like education, good food, good clothes, etc for their brothers who are considered torch-bearers of their family. This is done by their own Parents, and not only Father, Mothers also have part in this. This is just about mindset of the society in which we have been brought up. There is an urgent need to change this mindset. Let us exercise Gender equality in the true sense of the word and Lets pledge to teach our  gen next to RESPECT women.
My heart goes out for the parents of Damini. May GOD give them strength to wade through this un-fillable and tragic loss of their Daughter. Through this forum, I express my extreme grief and heartfelt condolences to the bereaved family. Today, I change my FB, Twitter profile to the black dot representing anguish over the incidence until the offenders of this atrocious crime are booked to justice. May I urge each one of you to do the same, sending clear message to the Government that we want speedy justice. and May I urge the Govt to make a memorial in her name as suggested by one of the panelist in the debate today which would always remind us of the barbarities, the fair gender in the country have gone through. Dear Mr. PM, Can we have our National Flag, fly half-mast for next one week, for She represented the women of India, and her demise is more sorrowful than the deaths of high profile bureaucrats.

May the angelic soul REST IN PEACE.

Day43 ‘ When you feel like giving up, remember why you held on for so long in the first place ‘ – Unknown

Day22: The tendency to whining and complaining may be taken as the surest sign symptom of little souls and inferior intellects. -Lord Jeffrey